Our NEWS this week 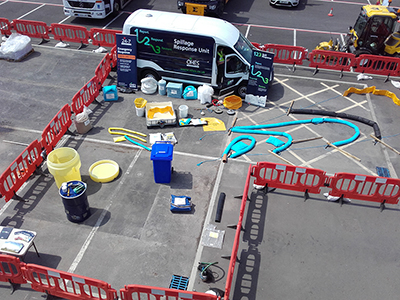 We had great pleasure this week in being invited to support our clients’ Kier Group at their SHE (Safety, Health & Environmental) Fayre in Greenwich, London. The event was designed to bring together Kier’s key suppliers in order to showcase their products and skills, and to hold demonstration workshops to the visiting audience. Over 300 delegates from the highways and construction sector attended the demonstrations over the three days; a really strong turnout and proof that such events are really popular for those wishing to understand other aspects of their industry and wishing to keep up to date with developments.

OHES held a large pitch with one of our Spill Response units in attendance along with a range of our pollution prevention equipment, spill kits and absorbents. Our Training Manager John Sennett was in attendance to lead the practical and theory presentations, ably supported by Charlie Beswick, one of our Incident Advisor team whom, when not giving emergency advice or dealing with emergency incidents himself, is also one of the team responsible for delivering Spill Kit Training to our clients.

OHES Environmental offer a range of spill training courses, spill kits and our 123 Spill Response membership service which is free to join and offers you free support in the often unforeseeable event that a spillage occurs and effects your business. For more information on OHES 123 Spill Response and Spill Training, click here or call us on 0333 600 2424 for an information pack 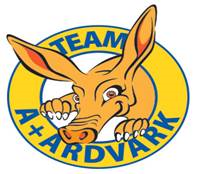 We know a really great cause when we see one and none can truly be finer or more deserving of our support than The Race To The Sun 2017 in support of the excellent work of children's charity Action Medical Research.

This year our friends at oil & environmental business Adler & Allan will be completing their annual “Team A+Aardvark Challenge” at this event and we at OHES Environmental are proud to be sponsoring them for their fine efforts. The event itself takes place on Saturday the 8th of July 2017 and will consist of a 44 mile mountain bike, a 12 mile run across the Tennyson Trail and a 1.5km canoe of the River Medina. Please join us in supporting Team A+Aardvark by visiting https://www.action.org.uk/sponsor/timroberts108 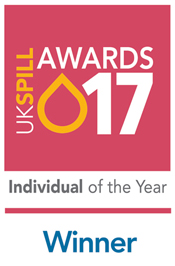 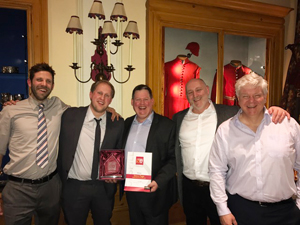 We are delighted to announce that Steve Page, our First Strike Team Leader in the West, has won the UKSpill Award for “Individual Responder” for 2017. Steve was nominated for the award by Regional Manager Nick Tomlin in recognition of Steve’s contribution and dedication to OHES. As well as taking ownership of First Strike Team operations based out of Tewkesbury, Steve also actively participates in the delivery of OHES’ UKSpill approved ‘Basic & Freshwater Spill Responder’ course and has successfully completed several training courses in the past year including trailer training, excavator training and OFTEC examinations. In addition, Steve’s positive attitude towards his work and personable manner could not go unrecognised, Steve’s manager Nick said “Steve has worked at all hours of the day, including day and weekend shifts – all without complaint. He has a very bright future and we wish him every success.”

The independent judging panel were hugely impressed by the submission which showcased Steve as someone who has made a fantastic start to his career in spill response. The award was presented to Steve at the UKSpill Annual Awards Dinner at the Watermen’s Guild Hall in London by our Managing Director Stewart Ower. Stewart said “It was a really proud moment for me personally as it was my last duty as Chairman of UKSpill to be able to present this very deserving award.

This is a tremendous achievement for Steve and a great moment for OHES as it reflects the standards and quality of our staff and service.”

OHES are delighted to announce that we have been awarded a three year contract extension at Heathrow Airport taking us up to December 2019. The extended contract involves monthly spot sampling of surface water and foul water discharges, plus bi-annual macroinvertebrate surveys and annual fish surveys, in addition to ad hoc operational response work. This win represents superb OHES team effort across the Environmental Monitoring Division and Ecology & Fisheries Division, and we have been delivering this outstanding level of service to Heathrow since 2011.


LEGO® is a trademark of the LEGO Group of companies which does not sponsor, authorise or endorse this film.

OHES have been featured in the new video from our sister company Pen Underwriting. The video takes place in “Pen City” and follows a LEGO Jonathan Turner, Executive Chairman of Pen, as he explores the different aspects of the Pen community – including a LEGO tanker rollover. The creation of the video involved 150 hours of filming, 2400 LEGO bricks and 3,780 photographs (18 photographs per second of finished film)!
OHES work closely with Pen Underwriting for Environmental Claims and manage spillage incidents on their clients’ behalf. http://www.penunderwriting.co.uk/Pages/PenLEGOFilm.aspx 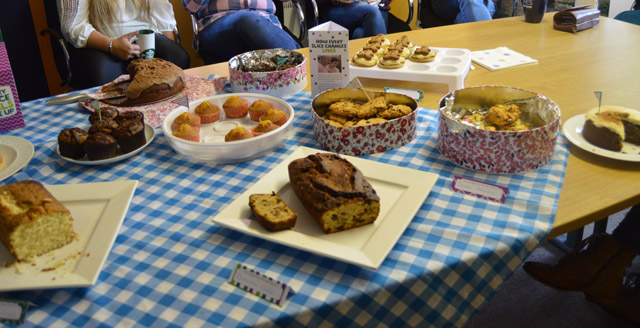 On 30th September 2016, OHES Environmental’s Wokingham branch played host to local residents as part of Macmillan’s World’s Biggest Coffee Morning to raise over £100 for a great cause. A selection of cakes and baked goods were scoffed by staff, local residents and retailers in the company’s board room in aid of Macmillan’s fight against Cancer. Macmillan’s first coffee morning was hosted in 1990 and has continued to grow since its inception, with over £138 million being raised to help provide support against Cancer. With all the cake finally gone, we’re already making preparations for next year’s coffee morning! 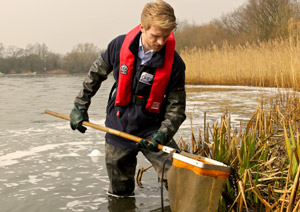 OHES Environmental has been awarded a 3-7 year contract to provide a water quality pollution response service to Thames Water.

The contract represents a significant win with the UKs largest water company and involves a team of field technicians providing a rapid response service to assess potential impact to surface waters arising from sewer network failures. The contract award follows from a competitive OJEU tender process which was initiated after the success of a 15 month pilot service delivered by OHES. The pilot service, which began initially as a 3 month contract, has been a fantastic OHES team success with delivery co-ordinated across the business divisions Environmental Monitoring, Incident Advisor team and Ecology & Fisheries..

OHES track record for quality was key to securing the contract, OHES has now responded and reported environmental data on over 1500 incidents ranging from minor unsubstantiated reports to more significant and complex incidents. The timely delivery of accurate and reliable environmental data from site has informed incident response measures and reduced the risk of minor incidents escalating into more serious events.

Hugo Jenkins, Environmental Monitoring Manager for OHES said “With the long term future secured the service can now go from strength to strength, we have exciting plans to employ technology and systems of work that will further enhance this industry leading incident response service to the substantial benefit of Thames Water and their customers”.

OHES Environmental have recently been accredited to the latest ISO standards for quality (9001)and environmental management (14001) and have been re-accredited to the current ISO standard for Health and Safety management (18001). These new standards, released in September 2015, ensure that the highest possible standards of business practise, product quality and delivery, and service management are instilled into our businesses.

At OHES we have moved to quickly to achieve these new standards to provide a clear message to stakeholders in our business activities that we are working to the highest possible standards to ensure compliance and the delivery of high quality products.

To put the achievement into context at the time of accreditation by DNV, OHES were only the 12th out of over 2000 of their clients to achieve these new standards demonstrating how stringent they are and the level at which the company is operating to for the benefit of our clients.

At the time of accreditation OHES are believed to be the only company in our industry to have achieved these new standards providing clients, contractors and other interested parties with confidence, assurance, and credibility about the services that will be delivered.

Copies of our policies and certifications are available on our website. 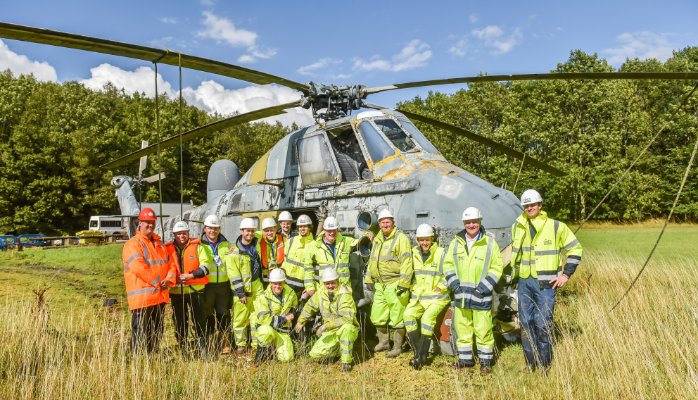 Congratulations to the first group of 26 candidates who attended OHES Environmental's UKSpill Approved Spill Responder Course at the Fire Service College, Moreton in Marsh, last week. The course was a great success for all concerned. Our thanks go not only to the candidates and their organisations, but to the College themselves for providing us with a fantastic venue for the week.

The candidates carried out their classroom training and sat their assessments at the well-known “Twin Towers”; a fine room dedicated to 9/11 with fascinating tributes and memorabilia from international fire fighting and rescue organisations. 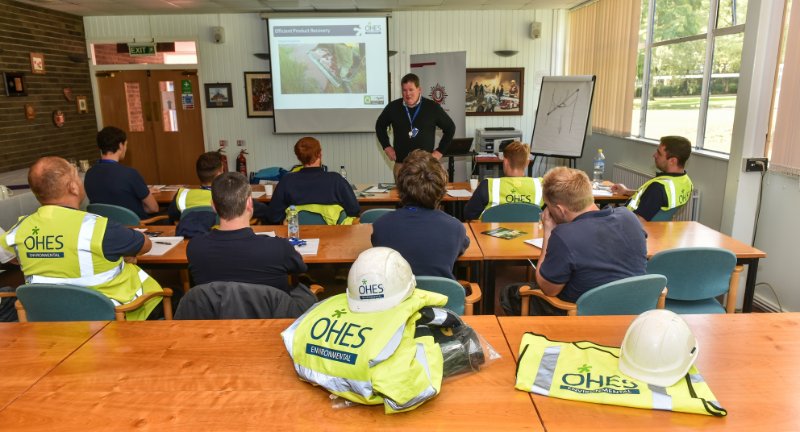 Practical hands-on sessions were conducted at a number of locations within the main fire ground; an £18m commercial building where carbonaceous fires are staged and HMEP (Hazmat & Environmental Protection) officers are trained in chemical spill & pollution containment; a rolled over articulated tanker simulated to be spilling fuel, and a watercourse adjacent to the College's Wessex helicopter and Hawker Hunter aircraft where candidates are required to deploy containment measures under assessment conditions.The College, established in 1974 and more recently acquired by Capita, boasts an incredible 300 acres of land and facilities committed to training fire fighters and rescue organisations from around the world. 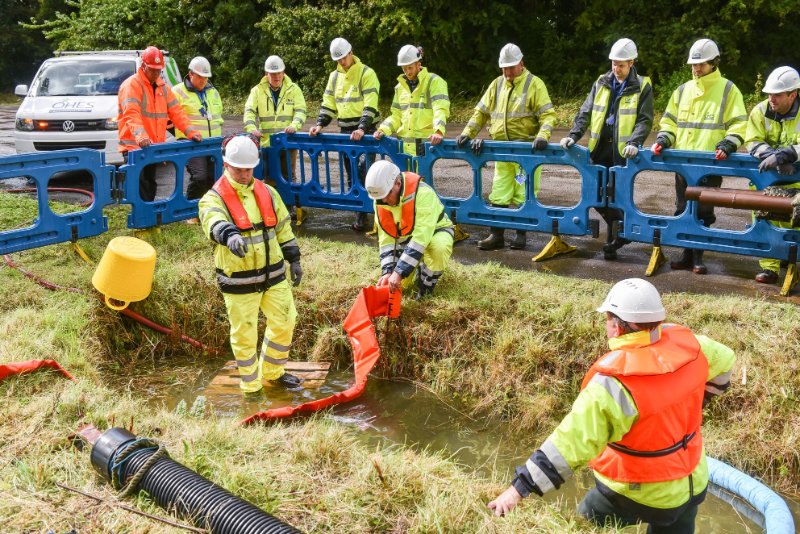 The course was the first ever UKSpill approved Spill Responder course (Basic and Freshwater) and is available via OHES Environmental to candidates from organisations seeking UKSpill accreditation, or just those actively involved or interested in Spill Response or response planning. The course can be delivered at our clients’ own premises or at venues such as the Fire Service College.

Basic Spill Responder
Much much better than others received so far, its “understood” the requirements of the basic responder course.

Freshwater Spill Responder
I’ve looked through OHES’s course and it is very good, practically focused with all other aspects well covered.

I know that assessors normally find something, just to show they have reviewed thoroughly, in this case, even when I thought i’d found something it was covered in the explanatory notes.

You can see the real life experience underpinning the course, from the pictures, and as long as the course is delivered by those as experienced as the writer it will be ideal.

Its nice to see something done right!